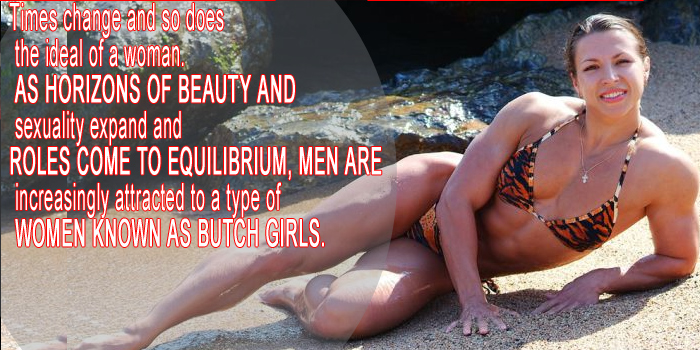 Times change and so does the ideal of a woman. As horizons of beauty and sexuality expand and gender roles come to equilibrium, men are increasingly attracted to a type of women known as butch girls. To put it short, a butch girl dresses and behaves like a man. She wears guyish clothes, smokes, watches baseball and enjoys hanging out in the garage. Not exactly feminine. Why do men love butch girls then?

They are strong and independent

When asked about their ideal of a woman, most men mention kindness, humbleness and delicacy. In real life, though, they choose the very opposite. As practice shows, men often fall in love with strong, confident and independent women who realize their personal value and lead a full life. Self-sufficient women who have their own career, opinion and ambitions are usually more respected and evoke more interest than classic princesses waiting to be told what to do. Dating a strong woman will motivate you to become stronger yourself.

They don’t play the lady/knight game

Most women want you to prove your feelings with constant attention, expensive gifts and romantic acts. But nobody is capable of playing the role of a knight all the time. Sometimes you just need to be taken for who you are and not who you are expected to be. A butch woman won’t demand manifestations of love on a regular basis. She won’t throw a fit because you forgot to bring her flowers on the Valentine’s Day. She won’t make you feel guilty for making less money than her ex. Butch women are happy just to be with you, because what they are attracted to is your personality, not your salary, social status or advantages as a spouse.

They are adventurous and risky

Relationship isn’t just about feelings. To build a meaningful, long-lasting connection, a couple must have common interests and common goals. How often did your ex-girlfriend blame you for watching a football match instead of going to a restaurant, spending more time with your car than with her, playing poker late into the night? Butch women don’t see it as a problem. In fact, they will readily support a conversation about sports, cars and other male stuff and will be excited to join you for a camping trip, metal concert or even wild booze. A butch girl is like one of your buddies, only in the female skin.

They are sexy – and beautiful

Who told that beauty must be limited to tight skirts, high heels and a lot of makeup? A woman wearing stylish short hair, a couple of tattoos and her own smell can look just as attractive as a superfeminine top-model. In fact, most men find athletic forms much sexier than skin and bone. Why are butch girls so hot? They have no false modesty and don’t play hard to get. If they want you, they just come and take it. Because of their male-like character, butch women usually make very passionate and active lovers.

As you can see, dating a butch girl has numerous advantages. Not only do you get an exciting lover, but also a true friend and adventurous companion. Butch women don’t hide under pretty clothes, they don’t play games and don’t expect you to solve their problems. But they do have something that makes them irresistible – personality. And they fall for yours too. Relationship with a butch girl is always thrilling, meaningful and fair. Isn’t that what people call happiness?

◄ Why are Blonde Girls so Appealing?

How Good is English in Ukraine? ►